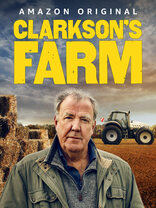 ​
Jeremy Clarkson did a thing!  To be accurate, so did his partner, Lisa Hogan, and his assistant/farm manager, Kaleb Cooper, and a host of other people who made the series and real world progress of Diddly Squat Farm happen. More on them in a bit. Let's talk about this newest series from the larger, often louder member of the triad who helmed Top Gear and The Grand Tour.

In 2019, Jeremy Clarkson and Lisa Hogan began production on a docuseries about a year on their farm in the Cotswolds. The original title was, "I Bought The Farm." Given Clarkson's history of health scares, it scanned as a bit of very dark humor that was thankfully scrapped before the show appeared on Amazon's list of streaming series. Jettisoning the overly self-reflexive title isn't the only thing that separates this from Clarkson's best-known series.  His presence is toned down. His antipathy toward political correctness and social justice warriors is more understated. (To be candid, nothing could ever inculcate a true seething hatred for SJWs like living in Nashville, but I digress.)

This is not to say that the showrunners have placed Diddly Squat Farm and its denizens in a cultural bubble. There are  references to the beginning of the COVID pandemic. At times, it figures into the narrative but doesn't overwhelm it. There is Clarkson's choice of a Lamborghini tractor and the Bentley that was featured in The Grand Tour's Pirate Special makes an appearance. The show is not innocent of a couple of callbacks per episode. When he's denied the driver's seat on occasion Jeremy insists that he is famous for it.  These and the references to James May's* lack of speed, another running joke on the auto shows, might bring a smile of recognition from Top Gear/Grand Tour fans. I suspect they might  prove to be speed bumps for those who aren't familiar with the aforementioned shows.

Another import from the world of closed roundabouts to wide open countryside is executive producer Andy Wilman. His influence can be seen in the way the show captures the beauty of the Cotswolds and the ironic juxtaposition of shots that sometimes belie Clarkson's narration. Wilman and director of photography, Caspar Leaver, have captured the farm and the neighboring village in ways that turn them into characters unto themselves.

Their work illustrates something that people who have never farmed might find overwhelming. The sheer scope of what it means to run a farm is writ large on the screen. There are no days off. There is no pause button. Clarkson and company show in sometimes excruciating detail the extent to which farmers are at the mercy of weather, the markets, and ever-shifting   government fiats.

The easiest assumption one could make based on exposure to Clarkson's antics on Top Gear and The Grand Tour is that this is a typical fish out of water series where the locals are treated as figures of fun. Even though both Clarkson and Lisa Hogan have stated in interviews they were new to this, they show they are no Oliver and Lisa.** It doesn't take long to see they are committed to the success of the farm and willing to go wellies-deep in mud and muck to make that happen.

There are a number of ongoing relationships with those who work on the farm and those who come by to help. Kaleb Cooper, baby-faced in appearance and well beyond his years in life skills is both a help-meet and a kid brother figure in the Diddly Squat firmament. He and his boss continually pick at each other over Clarkson's lack of experience and Kaleb's countrified sensibilities. 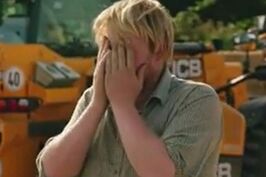 The latter managed to put an end of sorts to an idea that has been held for a long time by fans of The Grand Tour: that Richard Hammond was the most American of the three presenters.  There might be some arguments for that on a superficial level. The truth is, Clarkson's sense of scale is what one thinks of when it comes to Canadians and the U.S. farmers. That kind of go-go energy is often seen as a characteristic of North Americans. Tractors like the one that Kaleb barks at and Lisa eyerolls in the first episode are common sights on large working farms here and on the prairies up north. I watched this wondering if suburban English people might have the same responses to the expressed differences in senses of scale as North American viewers.

I will add here that Jeremy's use of expletives puts him squarely in Texas when it comes to his speech patterns. Given that there's an ocean and then some between us and we don't know each other, I feel safe sharing this thought.
​
Still, everyone comes off well in this series. It's hard to not laugh at Kaleb's exasperation with Jeremy and enjoy the warmth and humor Lisa adds as well as her ability to keep things grounded. By the end of the series, you'll be sharing Jeremy Clarkson's glee when he declares, "I've grown/raised/did a thing!" Yep. Jeremy did a thing. With what it has to show us about the lives of farmers, we're all the better for it.
Three quick notes:

1. If you're a fan of British television, hang on through the credits of the final episode.

tres-  If you are like me: in lockdown and missing farm stands, you can still visit Diddly Squat Farm Shop. Even though you can't buy cow juice or bee juice or bottles of spring water with no shit in it, virtual visits are a thing.

* Having mentioned May, I'd like to take a moment to recommend his series Our Man In Japan and James May's Toy Stories. Both are well worth adding to your lists.

**The couple who moved from Manhattan to Hooterville in Green Acres. Ask your grandmother.

​all images and video are property of Amazon.