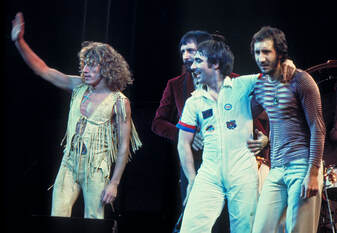 The numbered tiles in the clock radio on the nightstand flipped over to 4:55 am. There was the usual click as the radio turned on. It was the Who singing "Won't Get Fooled Again."

"Good," Kelly thought as she turned over and stuck her hands under her pillow for a last feel of the cool side before getting up. "I was getting tired of Bachman Turner Overdrive.

Wait a minute. That wasn't right. The way it went every morning for the past two weeks was the clock radio turned on eight seconds into "Taking Care of Business". That's what the cart, the automated cart that does not make changes in the pre-launch playlist, was supposed to be playing.

"No," she said as she took a couple of deep breaths and tried to collect herself. Roger Daltrey screamed from the tiny radio. She felt like doing the same.

"No," she said as she scrambled into whatever clothing she could reach and put on without too much effort.

Marianne Faithless jumped as the refrigerator door fell shut and then stretched and meowed sleepily.

Marianne snuffled, plumped down to the floor, and walked slowly to the living room.

"Won't Get Fooled Again" ended and Kelly held her breath.

"That was The Who with 'Won't Get Fooled Again' for the Nashvillian masses.  It is one minute shy of five a.m. and if you're up at this hour, splash some cold water on your pretty face, grab what you people call a biscuit and something hot to to drink to get yourself started. Here's another track from The Who, let me see here..."Who Are You." Enjoy the mayhem, mates!"

Kelly picked up the receiver and dialed the number to the station. The call letters and the dial location was the phone number, thank goodness. She's almost decided against it because it seemed so cute. Now she was grateful.

"My first caller and you're a breather? Brilliant!"

"And watch your language. Words that are nothing back home for you are a very big deal here."

"Such as,"  Kelly felt the start of a tension headache, "twat, cunt, fuck, fuckall, shite, shit... That's all I can think of right now."

Sean sighed. "Is that all?"

"Play music. Yes. Yes. Play music, but do nothing else. Please!"

There was a pause.

"Noel is gutted. Look. I'm gonna do station ID and then you have to the end of "Baba O'Reilly" to get here because I'm going to piss or take the piss once I put it on. You get to figure out which one I mean."

"Baba O'Reilly" is five minutes, no seconds. See you then."

Kelly heard the click as Sean hung up. "Bastard!" she muttered as she snatched up her keys and purse and headed out the door in her sock feet.