Closer - Josh Groban (2003 Reprise)   I have a soft spot for Josh Groban for the silliest of reasons. He has provided some of the some of the funniest, most surreal moments on American  television. On these links, you see him sing Kanye West's Tweets, his rendition of Baby Shark with James Corden, and one thing that breaks my heart that I couldn't find it, his fistfight with Brad Paisley on The Crazy Ones. This guy, and oh gosh, that voice... It looks like I've let the gimcrackery get in the way of my appreciation for his music. Even if you're not into sentimental ballads, Groban's voice and the lush arrangements on Closer make it will worth a listen.  In the interest of disclosure, he sounds best when he sings in Italian, so Oceano and Por Te are my favorite tracks. One other thing: Pets love Groban.  My cat always comes into my office when I play his music. And there's this little guy:
5/5 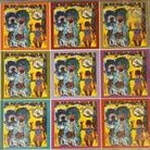 Bluestock  - Various Artists (2000 BMI/Adams Music)   A quick Google search turns up at least three Bluestock Festivals. The credits and some oft he sponsors point to this being one that takes place during the Beale Street Blues Festival. The Staples Singers' I'll Take You There leads into Carla Thomas' B-A-B-Y and moves along to songs from Ann Peebles' gorgeous, emotional rendition of  I Can't Stand The Rain, Push and Pull Pt. 1 by Rufus Thomas Tony Joe White's Poke Salad Annie, Shake 'Em On Down by the North Mississippi All-Stars, Henry Butler and Cory Harris' Let 'Em Roll, The Wild Magnolias' Life Is A Carnival, The Dirty Dozen Brass Band's Lickety Split, and ends with Irma Thomas' Time Is On My Side.  My point in listing all the tracks and artists is to show this has each artist's signature tune. This is not a disc for deep tracks so much as it's a mini-mester to teach where most of the the best of Memphis' Twentieth Century music can be found. This is skip free as far as programming goes. I'm not sure if this is still in print, but it's worth hunting down . 5/5

20 Years of Narada Piano - Various Artists (2001 Narada Productions)   P.J. O'Rourke once described New Age music as the genre best played of very expensive equipment, thus moving its fans to essentially invest in three thousand dollar wind chimes. I'm paraphrasing this and remember he was actually referring to Narada's cross-continent rival, Windham Hill.  Both labels have moved away from the squeaky-squawky. rattle and purr of mid to late 20th Century music. Both labels have kept the best of the best with artists like William Akerman, David Lanz, and Michael Hedges.  Lanz is one of the artists represented on this two-disc set. The songs here are much better that the boiler-plate "Peaceful Piano" material that can be repetitive to the point it feels like someone is trying to drill a hole into you skull with a stick of Nag Champa. The tracks on here are soothing, but alas, a little forgettable and unchallenging. Perfect for work and great for vegging to, but ultimately will be in high rotation for days when my clients are seriously disturbed. 3.5/5

​Rain of Mercy - Agartha (1996 Fearless Music)    Even though the liner notes indicate this was released in 1996, it sounds like it was engineered at least a decade earlier. The overuse of synths, Linn drums, and the mock tribal vocables, and overwrought wailing about love gone wrong make this one a must-miss. I feel like a ghoul panning this, because it was intended to be a cultural crossover event created as a benefit disc, if my memory about this is correct. It's not that I don't listen to 80s' pop. If anything, I probably own way too much of it. This just... I just don't like it.  1/5

​Covers - James Taylor (2008 Hear Music) .   It's not like we haven't heard Taylor cover other people's songs. He even mentions this in the liner notes of this 2008 collection. For fans of James Taylor, this will be a treat. This him making all of these songs his own. Having seen him in concert a couple of times, it is safe to say that he delights in the songs he covers as much as we love hearing the the mix of his new material with old-show comfort of his older standards. If there is any fault to this disc, it's that the energy that comes out in his live performances doesn't quite translate to a studio production. In some cases, his interpretation is so close to the artist associated with the song, that it made me wish he'd picked something else. Case in point, Wichita Lineman. His version is perfectly fine and would be fun to hear live, but it doesn't replace Glen Campbell's haunting rendition. At least on this disc, he's at his best when he wanders afield of the tried and true arrangements. His funk and reggae-tinged cover of Hound Dog teases enough to keep you listening.  On Broadway is another winner. George Benson's classic has been James Taylor-fied. Where Benson's version feels like a rueful tribute to lost and found creative ambition, Taylor's feels more like a confession of unexpressed dreams. He also does right by the oft-covered Not Fade Away. Like much of this disc, this studio version seems pithed of something. I'm left wondering if this is as lively as I want it to be, or does it suffer compared to memories of live performances?  4.5/5