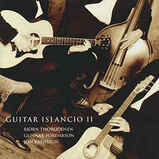 Guitar Islancio II - Bjorn Thoroddsen, Gunnar Bordarson, Jon Rafnsson (2000 Skifan) The Icelandic provenance and Scandanvaian titles may lead to very different expectations. If you were to listen to this disc, you would swear it is a collection of songs from a warmer part of Europe or North Africa. At least, that was my response when I heard jaunty fretwork that called forth the shade of Django Reinhardt, waltzes and tangos and other forms that seemed to come from anywhere but Iceland. This sequel to an earlier album that used the same Romani, Spanish, and "light jazz" influences is based on Icelandic folk traditions. This is going to bring shame on my alma mater because I am not going to look any of this up for a short take. And anyway: 1. The Kalevala was Finnish, and b. I was more interested in things like unclaimed fingers in jars of peanut butter, Satanic emblems on laundry detergent boxes, and my favorite - alleged ghosts and murderous shenanigans on movies and TV shows. (Seriously, there's no such thing, but that nonsense is as much fun as all of those chooches who have gotten Steven Biko and Nelson Mandela mixed up and swear we've skipped timelines or something. Of course I can talk about this. Back off, man. I'm a scientist.) About this CD? It's pleasant listening, especially if you're into acoustic jazz and Django and his creative children. Zat you? Give it a spin. 5/5 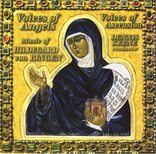 Voices of Angels: Music of Hildegard von Bingen - Voices of Ascension  (1997 Delos International)   Everybody chant now!  Hildegard is my favorite Christian mystic. My second favorite Christian mystic is Julian of Norwich. (How can you not love someone whose most famous prayer is "All shall be well and all shall be well and all manner of things shall be well?") I'm pretty much over the church, but I still love the writing these ladies left behind. Maybe I should add here that I tried to read Theresa of Avila's work. I was still a stone believer at that point. Just couldn't feel her. She was such a scoldy heifer.  About this disc... It's beautifully performed and very calming, something we need right now. There are a half-dozen very good interpretations of Miz Hildy's work. This one just edges out Anonymous4's treatment of her writing as the best of this particular genre.  Great for the curious and the catholic in musical proclivities. 4.5/5

Groundwork - Various Artists (2001 Hear)  This disc is a cultural artifact in two respects. First, it's one of those compilation discs created to raise funds and awareness. This time it's the U.N.'s Food and Agriculture Organization. We've moved a long way from the big name juggernauts like LiveAid (1985) to benefit discs being thick on the ground for a while to being rare birds in the retail ecology. The other reason this is a relic is its simple existence as a CD that was created to be sold at Starbucks. For some, those little CD racks contained chances to discover artists they never knew they liked. For others, it was a chance to sniff at the middlebrow nature of the Alt-Adult fare one could get along with their Venti Breakfast Blend.  So is this worth searching out? It doesn't have many of the usual suspects when it comes to benefit discs. What is here is surprising. Emmylou Harris' One Big Love is backed by the stomping thump of electronica. Michael Franti and Spearhead's Listener Supported is a good song that actually reveals more through the remix on this playlist.  At best, there are some surprises among the more engaging tracks. At worst, some of these songs are pleasantly unoffensive. 3/5

Stillpoint: Music For Tranquility - Sue Hoadley (2002 Susan Hoadley)   Hoadley's combination of classical harp and Native American flute makes a pleasant aural background for times when you just want to let music be a source of peaceful comfort. The real question for me when I pick up a disc like this is if it will reveal some aspect of the instruments I haven't considered before.  Hoadley's use of the harp as a counterpoint to the flautist's melodies can be interesting. The strongest tracks, Meditation and Awakening have an improvisational feel. They sound more like musical conversations. Letting Go incorporates phrases from Pachelbel's Canon in D in a freeform improvisation that may have you listening closer to a piece you thought you'd heard enough of. This is for fans of quieter collections. If this genre and the instruments involved are all too familiar, you might find some pleasant discoveries on this one. 4/5 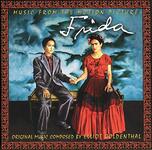 ​Frida - Original Soundtrack (2002 Universal Music Group) The program begins with Lila Downs' ethereal performance of Benediction and Dream. As an accompaniment to Julie Taymor's biopic of Frida Kahlo, it creates a chance to engage more with the music by itself.  It's also a nice 101 for a number of Mexican musical traditions. Multiple plays of this disc have afforded me the benefit of hearing this music outside of an academic setting. It has deepened my appreciation for these kinds of songs. Fans will love it. It could prove to be a challenging mind-opener for those who are just dipping their toes in this deep pool of traditions and motifs. 4/5