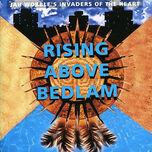 Rising Above Bedlam - Jah Wobbles Invaders of the Heart (1990 Atlantic)  The opening track, which is a very listenable drone/80s'-90s' global pop hybrid is classic Jah. Like nearly other release from this artist, There is a guest appearance by a female vocalist to soften the edge on at least one song.  On this disc, Sinead O'Connor provides ethereal vocals and the aforementioned drone on Visions of You. Also visiting from the girls' lineup is Natacha Atlas, who shares a writing credit on four tracks.

Why would you want to listen to this?  Wobble has a gift for using Eastern influences to create music in a distincly Western voice. Back in the day, this was called appropriation, a charge that was often lobbed at groups like Talking Heads. Have we come to understand syncretism a little better now? I hope the answer is yes but suspect that's not the case.  (Wanna see how that works in the 21st Century? Look at some of the Hoop Dancers in Minneapolis who are adapting their moves to Hip Hop music.)

The musicality of Rising Above Bedlam catches your head and heart from the AfroPop guitar lines to the percussion that pulses through these songs like the heartbeat of a living thing. This is one of those CDs that will end up on high rotation for people who like to really feel their music.

Through The Years - Tony Bennett (2006 Hear/Sony/BMG) There are complete collections of the works of Tony Bennett. There are themed collections, such as Duets: An American Classic, and then there are the boutique releases like Through The Years, which was on every Starbucks Hear rack in the late oughts. You would be hard pressed to find anything unfamiliar on this disc. It might not reveal more about Bennett's crqfty as a singer. What it does do is reveal Tony Bennett to anyone who is not familiar to his work, the best and most accessible songs are. For those of us who have enjoyed his work for a long time, here's your road disc for all of the comfortable standards that are fun to hear on the road. Grab this one if you can find it. The best is indeed yet to come. 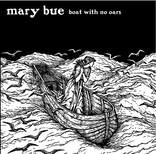 Boat With No Oars - Mary Bue (2007  Mary Bue) Sometimes I miss the independent music that found an audience on MySpace.  Yes, Bandcamp is nice, but there was something wild and wooly and so totally outside to corporate world of the music industry.  Boat With No Oars was  released during the time when release notation might be the artist's name or a website. Such is the case with Boat With No Oars.

The feel of this disc is late 90s, early millennial acoustic folk. Unlike many cutesy, hipster chicks with guitars, Bue's lyrics and songcraft go deeper. Her work is deceptive in that she's quite adept at using catchy hooks and clever observations of human nature. Those songs dig into your brain and they don't let go. You have to listen. Note to self: You also have to look for more music by Mary Bue.