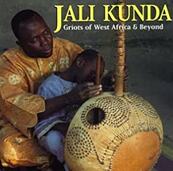 Jali Kunda: Griots of West Africa and Beyond - Foday Musa Suso (1997 Ellipsis Arts...)  Once upon a time, my music library had more of these kinds of discs than anything else. Whenever you look at the latest WOMAD offering and ask yourself, "Who would buy this?"  Welp.  You're looking at her website.  As an anthropologist /folk studies undergraduate larvae, I had this idea that two sure ways to get a handle on a culture were by getting to know everything I could about their music and their food. Don't - oh, please don't - mistake this for some kind of brilliance in social science. I am at best smart adjacent. One year, I nominated myself for, "Most Likely To Be Eaten By My Study Subjects In Papua New Guinea." The next year, I made another attempt at bogus CV stuffing with "Most Likely To Be Beheaded In My Sleep With A Marshalltown Trowel By Intoxicated Graduate Assistants." By that time, someone told me I was the president of the Anthropology Club (because nobody else wanted it) and to take things SERIOUSLY and do something CONSTRUCTIVE with my time.  Oh. Um. I'm supposed to be reviewing this disc. Ahem.

Foday Musa Suso is a Mandingo Griot from Gambia. The tracks are hypnotic, melodic, and accessible even if you've never listened to a field recording. I've heard and read people describe eastern music as "brocades."  The term is lovely and it fits in that context and in this one as well. The layering of traditional instruments has been dismissed by some (who know more than I do about this kind of music) as "Westernised for European/Western ears." Maybe, maybe not. To be fair, there are some tracks that employ instruments more closely associated with AfroPop. One of my friends' kids informed me that Lanmbasy Dub "slaps." I uh, think that's good?  And I agree. This would be my first choice for someone who has waded in the shallows of American artist's forays into indigenous music styles and wants a deeper appreciation for the source.5/5 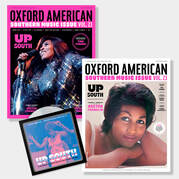 Up South - Various Artists (2021 Oxford American)   The latest entry in
Oxford American's music series focuses on artists who are not necessarily from the Southeastern U.S.. They are here because they produce the kinds of music associated with that region. I will note that I have not read the issue yet, so I might be off on their thesis for this collection. From the late Nineteenth Century to the first two-thirds of the Twentieth, there were quite a few people who left their families in the southeast to try for better jobs in the midwest and the west coast. Working class families followed the pipeline to work in Chicago, Detroit, St. Louis, and west to Oakland and San Jose. For some, it was a chance to find places where African American culture drove the arts. Music was especially influenced by the blues, gospel, and eventually rock and roll that originated back home. For women of color, it was a chance for agency and a way to forge an identity as an iconoclast instead of being tied down as caregivers and helpmeets to men who were rarely given a sense of agency of their own.

Sometimes OA sets the playlist based on themes or provenance. This one mostly follows a rough timeline, starting with the gospel roots of nearly every truly American form of music. It moves on to the elegance of Duke Ellington's Chopsticks through the funk and blues tinged tracks by Little Feat, John Doe, Iron & Wine and so on. This is one of those times when I feel reluctant to say too much. Every OA disc I have been lucky enough to get my hands on has been full of surprises. Even though I'll listen to them again, there's that first time when every track makes me pause whatever I'm doing and just take it in. 5/5 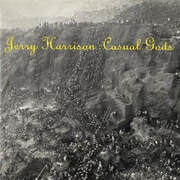 Casual Gods - Jerry Harrison (1988 Sire/Warner Brothers)  Age and time has changed my view of Talking Heads. I was one of many college students who loved, loved, loved the 'Heads. I also thought it was all about David Byrne and everybody else there to accessorize his vision...or something. I still respect Byrne's eye for talent and am grateful to him for creating Luaka Bop and thus making so much music that might not otherwise be available to Americans in flyover country.

What Casual Gods achieves is offering the rock, funk, and stick to your frontal lobe lyrics that sometimes got lost in all of the artfulness of Talking Heads.  There is a warmth and humanity here that was all but absent in some of Talking Heads' tracks. What might have been parsed as commentary in a Talking Heads disc or show is simply presented as a story here. I don't want to say it's artless by comparison. Then again, there is something artless about just living your life and feeling your feelings. Jerry Harrison captures all of that so well with this disc. 4.5/5
​