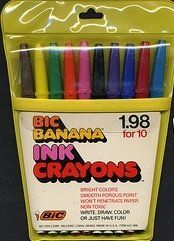 NOTE: This was written before I got a set of Tombow watercolor brush pens. I love them. If you touch them, I will cut you. That is all.

I. Need. To. Vent.
My much-neglected studio is getting a deep clean. Today I've had a busy workday and little physical energy, so I have been going through markers between clients and when they have sometimes asked for a moment to take the dog out to wee or see to a little one.

So here is what I've discovered about markers:

1.) Sometime in the late eighties... '87? '88? '89? I bit the bullet and bought a ridiculously big set of the Prismacolor dual-tip markers. I found eleven of them in my marker drawer. All of them work.

2.) Water-based markers are not of the Lord.

3.) My beloved McDonald's promo BIC Banana, the one pictured in the header...  I got it for .29 with the purchase of something that was most likely bad for me at McDonald's in 1972. Let me amend that. My mother was at critical mass with pastels, Dip Dots, and tempera. She forbade the ownership of Bic Bananas no matter how persuasive Charles Nelson Reilly and Ronald McDonald were. So let me make a correction. My father bought it for me. He was an artist and he understood only too well my unhealthy desire for those markers. When the sets came out, he bought me those, too. Thus began my bizarre lifelong love of teal.

4.) Whoever...Whomever...Whoever... I DON'T CARE! Whoever it was who talked the Conte' people into coming out with a tin of water-based markers - BIC? Really? BIC? The people who gave the world my beloved Bananas, especially the teal one?  BIC? Where was I?-  The responsible party should be sent to The Hague.

5.) I discovered some Faber-Castell PITT Big Brush Artist's Markers.  I remember finding them in small sets in the clearance section of an art supply store. I don't remember what I paid, but I recall thinking they were way too expensive.  I looked up the current MSRP and then I blacked out. They average 7.00 USD per marker. At the time, the fact that they were Faber-Castell sealed the deal.  To be fair, they feel good to hold, are deeply pigmented, and play well with nearly every surface I've tried.

Is there a problem? As a matter of fact, yes there is. None of the barrels match the color of the ink. Not one of them.  Faber-Castell, you are not the only perpetrators of this bit of art supply cruelty. Nobody seems capable of producing an alcohol-based marker with a label, cap, or barrel that matches the ink inside. You know? If I could suss out and restore my natural hair color in the early nineties after a decade of wearing tresses in hues that only occur naturally on tropical birds, it seems like you marker maker people could figure out some way to accurately label your products.

6.) Water-based markers are trash. I hate them.

Note: I have no idea if BIC Bananas were water-based. I don't want to know. Don't ruin my childhood.
Go Back: Arty Stuff - Home