Our libraries as expressions of who we were,
who we are, and what we wish for the future. 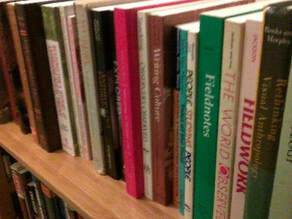 The first books I picked up when I started to sort through my library earlier this month were Marie Kando's The Life-Changing Magic of Tidying Up and Spark Joy. They didn't, so I put them in the growing pile of titles to be donated to the library. My style is actually somewhere between Dan Ho's laid-back Gai philosophy and Martha Stewart with a healthy dose of derp. Martha's big, brick-like guide to housekeeping stayed as did both of Mr. Ho's tomes.

But this isn't about the home style books or the garden books or even my two book cases full of cookbooks, food lit, and the big city snap-clip stylings of Anthony Bourdain.

This is about the hallway. My house is small, so there is only one hall. The length of it contained a Quasimodo-like Mission-style folding shelf from Target, two particle-board short monstrosities that had seen better days from Goodwill, and a trio of boxes with Rauschenberg-like designs on the side that were originally intended to display similarly embellished bottles of water. All of them were full of books.

Job one was to remove all the books, replace the shelving with fair-trade bamboo units, and then start the culling process. I started this once before, fell into a Levi-Strauss rabbit hole, and then reshelved everything. This time...This time will be different.

This is probably a good place to write a quick tangent about books from our -or at least my- past. There are books that imprint themselves so deeply they feel familiar even if I haven't looked at them in a very long time.  I figured this out a few years ago when a used book store put an entire set of Childcraft, the kiddie version of Worldbook Encyclopedia in their free bin.

No one wanted them, so I took them home and looked through them. Every picture, every story was like looking at a snapshot of my childhood. There was nothing new to be discovered, only pages to be revisited. I kept my favorite volume: Make and Do.  Then I gave the rest to other people who remembered them. A friend who grew up to work at NASA took the science titles. Another friend who teaches elementary social studies took a few, and so on.

I bring this up because it might mean handling the books in my hallway would have a similar effect. Maybe that was the source of my reluctance to go through them. Those years represented me at my best, me when my cockiness disabled my ability to get out of my own way, me confronting parts of myself that remain unfinished. These were patterns I didn't see until much later and did not confront until I started picking up the books that served as a roadmap to my undergraduate years.

There were more books than I expected. There were titles I thought to be long gone. Every book brought back vivid memories of when I bought them and used them for class. By the time I decided to finish my undergraduate degree, I had been in and out of school for nearly a decade. Buying textbooks for previous semesters had always been a depressing chore. They were too expensive and not books I could see myself keeping. Standing in line at the university store in Kentucky, my arms were full of titles I wanted. The prospect of reading them made me so giddy there were books I sometimes put off reading before I had to meet a class requirement because I was afraid of being disappointed.

Sitting among the  stacks of books, I opened them and read random pages. Sometimes I happened on a passage I'd cited for a class project or something resonated based on a memory. Those pages reflected what I saw at the time as my future.  Here was the world the university showed me: equal parts Hogwarts and something like the beautiful, sometimes tragic landscapes captured by James Agee. Those books were the last vestige of the person I was then and I wasn't sure whether to feel relief or to mourn.

The books that are still here are shelved for one purpose. They are here to be read and enjoyed. To be sure, there are titles destined to be what I sometimes call "Victory Lap  Reads." I'll travel their pages one more time and they'll go to the library where some other person feeling eager to explore the world will learn from them. Some will stay with me. Victor Turner's books still inform me as I write plays. What I know of his life and can read from his work assure me there is rhyme and reason to the parts of us that seem to connect to something bigger and beyond the limitations of our immediate ken. Clifford Geertz, Barre Tolkien, and Bruce Jackson vividly recounted the human dimensions and sometimes dangerous beauty of being trusted with life stories. Vine DeLoria, who I admittedly did not read until long after I graduated, keeps me pretty darned humble.

So what of the future? This little section of my library was my future at one point. Now? So much of what I learned from those books informed the way I approached everything I undertook. I feel like there is still a lot to learn. Moving forward, those shelves may hold a brilliant destiny I never thought about before or it could simply be my personal Humanity 101.