Ray Chased the Rain Away

Note:  This story has a soundtrack.  Click play and start reading. 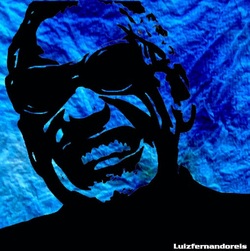 Back in the day, it was called The Beale Street Blues Festival.  As part of the series of fortunate events that made Memphis such a great place to be in May, it shared the month with the barbecue contest and whatever country was scheduled to be feted with themed activities at local theatres, museums, and galleries.

All of those events drew visitors from every point on the compass.  As usually happens when the crowds get a little bigger and the focus goes from keeping the home folks happy to company manners, ownership and identification slips a little. The barbeque event and the celebrations of different countries always seemed like they were for the visitors.

The Beale Street Blues Festival was different. While the rest of the world was in the thrall of New Wave, Hair Metal, Punk, and candy colored 80s' Pop as handed down from MTV and Vh1, the headliners on Beale were artists who might not have seen their names on a Billboard chart for a decade or two.  They didn't need that in order to be a headliner at Memphis in May.

Sometimes all you have to do to get top billing is go home.

Coming home for some meant a journey back from France or Sweden, where the sting of racism and the hollow-gutted echo of childhood poverty could fade into the physical and cultural distance. Some came from the Babylon-like delights of Los Angeles. Others traveled south from Chicago and New York, where the Blues was the sin-soaked wail of homesick guilt crossed with the jack-shot delighted shout of freedom from the same.

To come home to Memphis' music was to affirm that royalty didn't begin and end with the mecca of plastic simulacra of history in Whitehaven's Graceland. It was a triumphant return to a revived Beale Street and a Stax-Volt that went from a dusty, collapsed ruin behind a rusted chain link fence to a vital part of America's music heritage.  It was the pulchritudinous harmonies and rhythm of the church on Sunday morning while the memories of neon-lit sin and moonlit bargains at the Crossroads still rattled around the backs of not too terribly penitent skulls.  It was to all of this, to the heat and humidity and the crowds that defied a single label of ethnicity, social status or creed, and deep south maddening slowness that Ray Charles was returning home for his star turn on Beale.

That first Friday in May in 1989, the skies threatened to open up all day.  The first rush of intense heat that belies the Blackberry Winter of mid-May caused everyone to shuck their heavier clothing in anticipation of the first of two nights of Memphis' music.  The bill included Rufus Thomas, Albert King, and Kool and the Gang, all opening for the undisputed king of the night, Ray Charles.

As the sun set on the Mississippi and each performer played, the air got heavier and damper.  Everyone was soaked from sweat and humidity before the first raindrop hit Tom Lee Park sometime at the halfway mark in Kool and the Gang's playlist.  Lightning lit the river and the well-trounced grounds grew sodden. People huddled under copies of the Memphis Flyer or bags or a shared windbreaker as they hurried to their cars.  Well, some people. Most stood and waited while Kool and the Gang struggled through a couple more songs and then waved to the crowd as they admitted defeat and headed backstage.

A few minutes stretched into thirty.  We watched festival officials take turns walking onto the stage and staring speculatively at the sky.  I huddled with my friends, Anita, Mark, and Robert and waited and hoped.

"They might call it," Anita, who was a sound tech, looked at the setup. "It could get dangerous."

"Let's wait it out,"  Robert murmured as he tried to turn a two-person umbrella in a direction that would shelter the four of us.

An older woman, who was probably younger than I am now, turned to us.

"I am not going NOWHERE!" she declared. "I have seen Ray Charles every time he has come to Memphis since I was in sixth grade. I am not about to let the rain stop me from seeing him now!"  She smiled at us.  "You sit tight.  He'll play."

The rain was not as hard or as cold as it had been earlier, but it was steady.  Every step meant trying to stay upright as the loamy, sandy mud suckered around our feet.  The MSU Chucks I'd looked forward to wearing were heavy with mud, their school spirit blue and white forever stained Mississippi mud brown.

Everyone huddled together in small groups, wet miserable and exhausted.  When the lights on the stage dimmed, it was almost as if someone had kicked the remaining props from under the crowd.

Then there was a squeal of feedback as a mic was turned on, followed by a spotlight. Ray Charles walked to the piano and sat down.

He adjusted the mic and smiled.

"Rain is not going to stop Ray Charles."

The cheering quieted as then he counted off and began to play. By the time he'd played the intro, the rain had stopped.  By the time he finished his first song, the sky had cleared.  The stars and the moon shone down on the river.   We swayed, clapped, sang along at his invitation, and danced the rest of the night away.

As we walked down Beale to Robert's car, I felt someone touch my arm.  It was the lady who stood near us. She was arm in arm with her gentleman friend and what looked like a couple of sisters or close cousins.

"Now sweetheart, aren't you glad you waited?" she asked.

"You got that right!" she said, "Now you be careful going home." And then she blew us a kiss as her group walked into the crowd.

Still giddy from seeing real magic, we drove and chattered and the more we talked what happened, the less real it seemed.  Telling it now, it feels like a tall tale.  Still, those of us who were there remember when we saw Ray Charles chase away the rain.
​​Go Back: Miscellany - Emily Dickenson Is Sick Of Your Shit - Home