Review: Coming 2 America
This Ain't No Disco, It Ain't Wakanda... 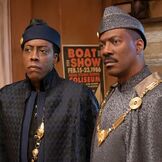 WARNING: THIS REVIEW MAY CONTAIN SOME SPOILERS

Decades ago, I argued that John Landis' Coming To America (1988) was a cinematic fairy tale. It had all of the components: the literal and figurative hero's journey to a strange place, the entertainment of royalty unaware, a commoner becomes royalty, a suitor is determined to earn the love of his romantic interest without the his station in life coming into play, a wily sidekick, and a cartoonish villain. There was even a fictitious kingdom and a happily ever after. The script had a funny, sweet quality, and Landis took a light hand in directing Eddie Murphy, Arsenio Hall, and the supporting cast, all of whom brought their A game. Thirty-three years later, I'll stand by my point that the first movie was a fairy tale and add that Coming To America deserves its status as a well-loved classic.

Did it need a sequel? There's the rub. And even though this movie isn't nearly as good as the first iteration of Akeem and Semmi's misadventures in America, it should be borne in mind that the bar was set pretty high in the first place. There are so many places in the first twenty minutes where Coming 2 America looks promising, but veers off course and disappoints.

Maybe part of the problem isn't that our heroes are revisiting their old shticks and stomping grounds so much as there is the slimmest acknowledgment of what made audiences take the heroes of this story and everyone else to heart. In 1988 we saw Akeem and Semmi as young, optimistic innocents in a place where opportunity is plentiful, but often comes at an almost too dear price of compromise and conformity. The assumed cynicism that marks the attitudes of the American characters is mirrored by Akeem's royal family.  The day was saved by true love. Lisa, the American woman Akeem has fallen for, makes it clear she loved the sweet man who worked for her father, not the prince who was less than candid about who he was.

Coming 2 America brings us to present day Zamunda. Akeem and Lisa are still happily married. They now have three smart, beautiful daughters, the eldest of whom assumes she will be the heir to the throne. Akeem's father, King Jaffe Joffer, who is dying, declares that only a male heir will do.

A male heir is found in New York. There are two brief trips to the city that total maybe twenty minutes out of the hefty hour and three-quarters running time. The fish out of water are now Lavelle, Akeem's son, and his mother. This brings up another problem. Lavelle is initially shown to have a sharp sense of self awareness. He sees where his life is headed and wants agency and positive change. He understands how systemic racism and classism work and calls it out when he sees it. After this is established, he seems to be a little too willing to follow Akeem to Zamunda just because the latter flashes a briefcase full of money. 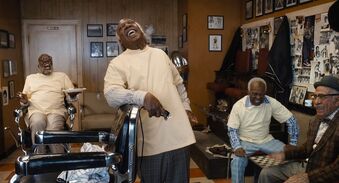 Should it have been that easy? Maybe some more time should have been devoted to Akeem winning over Lavelle. Eddie Murphy has proven he has the talent to carry a comedy about family parenting. I wish they'd given him a chance to show more of that side of his character. It would have been a decidedly different movie, but then maybe they should have made a different movie.

What was lost in character development and a chance to see Murphy and Hall flex their acting chops was taken up by callbacks and nostalgia. The obligatory reference to Trading Places was there. So was a brief visit to one of the more famous scenes where all six of the  people onscreen were played by Murphy and Hall. These are admittedly pluses, as is the funeral scene, which is bigger, splashier, prettier and more fun than the cast-of-thousands scenes in the first movie. (Seriously, if you don't watch any other part of Coming 2 America, watch the funeral. It turned our shared watch session into a party.) ​ The problem is all of these are just callbacks to better performances in a superior movie. It made me wonder why I didn't just opt to watch the original in the first place.

​     It's frustrating because I wanted so much for this movie to be as good as the first one. It feels less like a continuation than a holiday special featuring favorite characters from the past. I'll admit I watched it and enjoyed parts of it. Almost all of my pleasure was derived from how much I love Coming To America and the extent to which I'm a fan of Leslie Jones. This movie made me want to send her, Lisa, and Meeka and her sisters to Wakanda. I think we would have all had a better time.

Sorry Eddie and Arsenio. Y'all still made one of my favorite movies, it's just not your latest film.