Smile For The Tennessee DMV 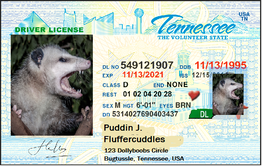 Gallatin is a lovely place.  In fact, Readers' Digest named it the friendliest place in Tennessee.  So why didn't anyone want to go with me when I mentioned running some errands there?  Maybe it had to do with the fact that one of those errands was renewing my driver's license at the local DMV. In this new age of everything being verifiable for Homeland Security, there is more paperwork, more personal information to be disclosed, just more of everything.  It is a slog made into something just short of an administrative death march.

I'm old enough to remember when Tennessee IDs included weight, phone numbers, and Social Security numbers, so I'm probably not as bothered by all of this as I should be.  Most people are probably far less bothered by the prospect of sharing this information than they are the final step of the process, that moment when we stand in front of a screen and smile at the blue dot.  For those who are there because they've hit a personally critical age ending in a zero or five, it might even be considered adding insult to injury.

I am 55.  There, I said it. The truth is, I've never minded telling my age.  It seems to lower expectations, meaning I am free to go on being my weird self unimpeded because I am now too old for anyone to care what I do. Still, I decided to try to make lightning strike twice and have a flattering DL photo, something that last happened in 1986. So I relaxed my hair, tried to find something flattering from the clavicle up and went to the DMV.

Being a smaht gel, I took a good book: "One More Time: The Best of Mike Royko."  As I waited, I read.  As usually happens, there was some man hoping he'll meet the love if his life. He will inevitably act on the presumption that I might look like those smart girls in the movies who only need to remove their glasses to look like Scarlett Johansson. What they miss is that happens because those women are Scarlett Johansson. I have a long history of dashing the hopes of men and today was no exception. His expression indicated when he saw what I was reading, it nearly did him in. When he looked at me, in my mind I could hear the audio tag from the old Mortal Kombat game. "FINISH HIM!"

I just wanted to get my ID and get on with my day. However, my own hopes for that were being destroyed by a fluttery women who kept interrupting the agent I was supposed to see. She wanted her picture taken again. And again. She just wasn't happy with the one they made for her.  The agent patiently explained that she would try again, but she needed to let some of the people who have been waiting get their business finished go first.  Every time the agent said this, Flutterby would sigh and stare at her.  I'm sure she was trying to convey some sense that this was a tragedy for the ages.

At first, I thought she was a teenager.  Her buttery figure was encased in jodhpurs? No, leggings. She was also wearing tall riding boots and a tight shirt that hit her just above the waist.  Her hair was pulled into two fluffy blonde clouds of Cindy Brady pigtails. Her voice was that high, lisping, affected nasal twang everyone not from here assumes is our natural way of speaking. I felt some sympathy. Were the girls wearing pigtails now?  Maybe I should be grateful my generation is remembered for tall mall hair.

Then she turned around.

You know those pictures of Donna Douglas in later years?  I'm talking about the ones where she's at least seventy and she's still wearing her Ellie Mae Clampett glamor-girl hairdo. (If you're too young to know who I'm talking about...Well, Google is your friend!) Flutterby was at least my age. I wondered what her picture looked like.

My turn in front of the camera came, eventually. The agent was very nice.  She took her time and got me to relax. After she snapped my photo, she ran the card and asked me if it was okay.  It showed my halo of gray hair and loose skin from age and weight loss. It was more than okay.  It was a nice and accurate picture of me and it was warm and rather flattering. So there I was on my TeeEhn-DeeEll, a smiling middle-aged woman.

I told her how much I liked it.

"We try to make people happy," she said.

As I left, I saw poor Flutter still waiting, tapping a booted foot and staring at her phone.  I'm spitballing here, but it's a good bet she wanted the kind of filter the phone on her camera would offer. I hope she was happy with one of her pictures.
​​Go Back: Miscellany - Emily Dickenson Is Sick Of Your Shit - Home