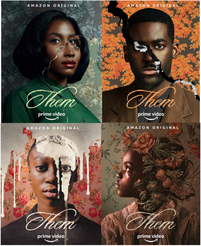 There is as much to like about Little Marvin's latest creati0n as there is to criticize. Them is a decidedly mixed bag of a series. The short form is the series is uneven, overlong, and meanders in a way that scans like the showrunners were second guessing themselves. It is also beautifully acted, sometimes mind-bogglingly imaginative, and captures the raw pain of being Black in mid-century America.

The series follows the Emorys, an African-American family from North Carolina who move to a pastel pretty Whites-only by covenant Los Angeles development called West Compton. Their move was prompted by two things: trauma at the hands of racists and a chance for the father of the household, Henry, to begin a career as an engineer for an aeronautics company. It is clear from the flashbacks that slice like shards through the straightforward narrative the family is bringing their demons with them.

Their demons.  Referring to them as demons is a function of vocabulary failure on my part. They are bringing their pain and fear from living among savages who live to inflict hurt for no other reason than they can. When they arrive at their new home in Compton, their neighbors might have more and dress better than their cousins back in the Carolinas, but their evident belief in their entitlement by dint of being on the winning side of history is no less pronounced. There's an expression we use here in Tennessee: White Trash with money. If the kitten heels and helmet hair fit...

​     The trailer (added below) presents Them as something like The Shining or Carrie.  While it could be argued Little Marvin, Lena Waithe, et al may have been influenced by film versions of Stephen King's novels, the resemblances between Them and those works are superficial. I will add that anyone expecting the thrill-ride feel of a Jordan Peele movie is going to find something very different.

There is a very real, chilling horror that makes Them chilling to watch. Unfortunately, it is not delivered by the gnarled hands of the wraiths that torture the members of the Emory family. It is found in the acts of cruelty visited on them by neighbors, by authority figures, by those whose casual encounters are tinged with beliefs they might not even consciously recognize as racist, hateful, destructive.

While watching this with a group of friends and acquaintances, some of whom were persons of color, some not, I noticed the White people in our group* were more comfortable with the ghosts than they were the racists. When it was explained by me and a few others that some of the horrendous acts of insult committed as a show of ownership on Black bodies were based on real events, there was a lot of denial. One person -who is no longer speaking to me- first told me it was a lie, then told me even if it was true, they didn't need to know that.

They do. This isn't over. We can't breathe a sigh of relief and say it died out with our ancestors. This leads to one of my biggest frustrations with Them. The real bogeymen were the people calling a grown man "boy," the high school students who tormented a young woman trying to get an education, the condescending manager who wanted a cookie for finding "one of the good ones." The ghosts and ghouls were like headpats to anyone who wanted to shift blame. I wonder if it was a hedge bet to make people like me happy.

The supernatural elements of the story grind the series to a halt. While it might have arguably shifted the genre designation from horror to drama, Them would have been well-served by losing all but two of the ghostly sub-stories.  A couple of the characters develop variants of tulpas.** In one case, this happens when the character is overcome with trauma that was never sufficiently addressed. One gets the feeling he was probably told to walk it off. The other happens when one of the Emory children feels so abandoned by those who should have made her feel safe that she splits, almost amoeba-like, into diametrically opposite people. Those are the only elements that work and even they are short circuited by the need to make them more than personal demons brought about by pain.

From a strictly critical viewpoint, Them is more than twice as long as it should have been. It wanders to narrative threads that are dropped. The expression: "kill your darlings" comes to mind. A stripped-down two and a half to three hour version would have offered something with more impact. I did not care about Betty's backstory or her being held hostage by the insane milkman. All I could think was how relieved I was we wouldn't have to see her anymore when the milkman  gunned her down like the demented pretty pink muppet she was. Why was that even included? Sunken production cost? That time could have been devoted to the Emorys who were already in California.  Same goes for the origin story of the Black Hat Man. Is this a setup for Season Two? Sorry, but no.  Just...no.

Some of the episodes feel unfocused. The production values are uneven. The opening titles for the first episode are a brilliant pastiche of late-50s/early-60s credit sequences. Neither they or anything like them are seen for the rest of the series. For every way this series hit home, there is something about it, some detail or tangent that is frustrating to the movie and TV lover in me.

Would I recommend this? With the aforementioned reservations in place. Be forewarned: There is a dead pet. Horrible things happen to children. There is an unblinking look at racial violence. Proceed at your own risk. At worst, you'll be frustrated by the limitations of this production. At best, you'll be awakened to what the American Promise looks like to those who were never meant to be included.

*In the interest of disclosure, I am White.
** A tulpa is similar to a pretend friend. The difference is tulpas can splinter into fully dissociative personas.

Note: All images and video are property of Amazon Prime and Sony Pictures. They are included here to provide examples as part of this review .