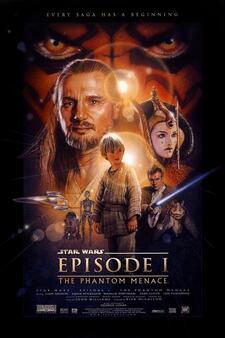 A more fitting title for this entry in the Star Wars franchise might have been Episode I: The Revenge of Short Round. It contains some of the the worst characters and possibly the least considered acting to come out of Lucasfilm, much less any of the nine theatrical releases in this series.

In 1999, I left the theater feeling let down by what I saw. The trilogy I enjoyed as a teenager was tightly constructed, beautiful, mythical in its themes, and the creative minds behind those films seemed to trust the audience to build worlds along with them. This latest iteration offered none of that magic. It was an overproduced, over-written, bloated Polish wedding of a movie. My eight-year-old nephew had a decidedly different take on the two hours he'd just spent in the dark.

"That was the BEST movie I have ever seen! EVER! It was..." He stopped in his tracks, took a deep breath, and almost fell over with the enormity of trying to find words for what he'd just watched. "There were whole worlds! It was so great! The race! Aunt, wasn't it the greatest movie you'd ever seen? What was your favorite part?"

I was tired, having just finished a rough week of working third shift crisis intervention. That's no excuse. It was one of those times when I really should have remembered I was talking to a child and employed a filter, but I didn't. I said Qui Gon Jinn and Obi Wan Kenobi were pretty and made me happy. I offended my nephew.

Well, yeah, I did. And droids. I wanted to see the new/old droids, and truth be told, they were impressive. In the interest of accuracy, I need to admit that I have spent slightly more time in darkened cinemas looking at boys than I have droids. <cough cough> Mr. Darcy <cough cough>

So I revisited the first/fourth Star Wars movie, depending on who you ask.  Was it as bad as I remembered? Well, yes and no. For me, it's still not nearly as good as the first three releases. While there are some qualitative aspects that push the argument for a drop-off in quality, it could also be argued that the first wave fans have a generational bias against the kind of storytelling employed by Lucas for Episode I.

The adolescents and young adults who filled the theaters in the late 70s' were used to seeing movies as a way to bear witness. We took away the characters and themes as lore to be shared. Our identification was tribal: shared information, a bespoke material culture generated by collector communitas, and identification as a fan that might, at most, be acted out as cosplay at conventions.

By the time my nephew's generation bought tickets to the first of the next trilogy of films, storytelling was more participatory. The mythic narrative constructs laid out by scholars were replaced by a burgeoning gaming industry. Actors and writers who might have worked exclusively in film and television a couple of decades ago were now acting as creative professionals for games.  Spiritual growth was replaced with leveling up and the beings who served to move a Hero along his or her path were delegated to disposable prop status.

For this rewatch, I tried to holster my prejudices. Some things were just bad and this time I found myself feeling angry on behalf of some of the actors.

Ahmed Best took a lot of flack for his turn as Jar Jar Binks. Comparing his character with, say, Wicket Widget Warrick, it is easy to see he wasn't given very much to work with. The Ewoks might have been a frustratingly cute addition to the Star Wars universe, but there was a cultural richness to the world-building involved. Informed viewers could see Colin Turnbull's ethnographic writing as a reference for their arboreal lifeway. Compared to Wicket's aboriginal warrior who maintained his dignity while guiding a wiseass coterie through his arboreal world, Binks' hapless Gungan is a cartoonish Wile E. Coyote manque meant to be babysat and corrected by Qui Gon Jinn and Obi Wan Kenobi.  I wonder what Mr. Best would have done with a character created more like the Ewoks.

Jake Lloyd was too young and simply did not have the chops to be equal to the scale of the story. It would be easy to take a cheap shot and say he was the Cousin Oliver of the franchise. There is more to what went wrong.  He was ultimately a self-insert for every kid sitting in the dark, daydreaming about the kind of empowerment Young Skywalker enjoyed even as a slave.  He held down a job, seemed to know everyone, was an engineering whiz who made is own landspeeder and droids and generally bossed and blustered his way around Lubbock, Texas, er, Mos Espa, Tatooine; all before reaching an age in the double digits.

However, when the crew got things right with the Phantom Menace, they got them very right.

The art direction: The creature designs, the costumes, the droids...all of it was on point. Gear heads might cry foul at some of the obvious CGI sins, but overall it was pretty to look at.

Natalie Portman's Padme/Amidala combined warmth with a vinegary regal quality that was reminiscent of a young Katherine Hepburn. She was one of the new characters I wanted to see more of back in 1999. That has not changed.

A couple of not-so-newbies' origins stories were presented in this chapter. R2-D2 and C3PO may not have been as fully formed as characters, but it was fun to see their humble origins. Their journey was easily as rich and interesting as any of the meat puppets onscreen.

Finally, a bit of real-world cool made its way to the screen. Crowd scenes are sometimes littered with Easter Eggs in the Star Wars universe, and this film was no exception. The race scene included a cheering Warwick Davis in the crowd and one half of the two-headed color commentator was voiced by Greg Proops.

Do I regret the two hours and some minutes I spent revisiting this movie? Maybe time and seeing this in a generational and historic context has mellowed my grievously wounded fangirl's sensibility. Ultimately, I think it comes down to the gained wisdom that things change. Time moves on. This is something sports fans understand probably better than geeks ever will. People who get caught up in nostalgia for players and seasons are often told to "cheer for the laundry." This seems like the healthiest way to approach Star Wars in its many iterations.  Some people outgrow the urge to slay Sith Lords or they simply get too old to do so. Beloved players and characters die. This is when we understand that we've had our time and while we are welcome to enjoy what comes next, we need to make room for those who are making the initial discoveries that fired our own love for all things Star Wars when we were young.