A (Sort of) Brief History of Zen Dixie 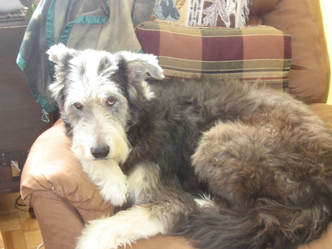 The Search For The Perfect Name
After a few years of playing with the idea of selling my art, I decided to get real and grown up and do it right. My agent suggested I find a brand that would reflect the cozy cuteness and the granola crunchiness of my work. So I spent the better part of 2006 and 2007 searching for just the right name.  My first choice was owned by a photographer. The domain name that was my second choice turned out to have been bought and marked as a gift for someone who was being encouraged to share her creations with the world.

"You could use dot net instead of dot com." My agent loved option number two as much as I did. But I would visit that site and read the heartfelt message left by the person who bought it for his friend. There was no way I would play dirty with those nice people. (I just checked to see if the artist ever made use of the site. The domain is now for sale for 2,000.)

I was about to just use my noms de plume et pinceau as a domain name when a friend told me about a movie he worked on called "Because of Winn Dixie." Winn Dixie, the dog in the title, was a big, goofy sweetheart who reminded him of my own canine overlord, a Beardie/Old English Sheepdog mix named O'Neill.  I fell in love with the movie and played around with the name, using the prefix from the other choices.

"Do you think Zen Dixie would create a confusion of brands?" I asked Leonard.

"What? You're opening a grocery store? Of course not. Do you like it? I like it. It's punchy. It conveys the image you want. It's you. Go for it!"

With that, he emailed me the link to the USPTO and told me to contact him if I needed help.

Doing the USPTO Dance
Do a web search on filing for trademarks and you'll find hundreds of lawyers and a few paralegals willing to run the gauntlet for you for a fee on top of the costs of filing. They're probably good people. If I'd been really unsure of what I was doing and didn't have this weirdly cocky lack of fear of federal process, I might have hired one of them.

This entire section probably scans like three paragraphs of not-too-subtle humblebrag. Believe me, it's not. I've poked around Google and read some of the horror stories about trademarks taking years to complete with multiple rejections and corrections, causing lawyers to go from dewy optimists to crusty cynics while their clients' faith in humanity eroded memo by government reminder postcard by billable minute. They will tell you those registered trademarks are hard won badges of honor and they are right.

So how long did it take me to get my trademark registered and published? A year and a day. The lawyer who handled my case at the USPTO end was thorough, clear about what she wanted, and just plain fabulous. There's a possibility I am some kind of sharp legal savant, but I think the truth is closer to something like me being stupid lucky.

Handmade and Heartfelt
The first version of Zen Dixie was a storefront for my handmade items and art. The "about" page featured a picture of my CEO, O'Neill the Sheepdog Mix. Zen Dixie V.1.0 limped along for a few years with little business but a healthy amount of page hits from friends and acquaintances who enjoyed the stories about what I was selling more than the items themselves. By 2009, the site was pretty much a side project that I gave time to while covering hockey for another website. I did art as I could, but there was little time to do much, since I had picked a sport with an insanely long season and sometimes as many as three games in a given week.

Trying To Make New Media The Old School Way
Working in "New Media" was an education. I learned about things like SEO and how to get traffic. It was also a lesson on the relentless nature of online coverage. The sports site I began writing for in 2009 started out as more of a literary outback. We were advised to write well about the aspects of hockey that moved us, and avoid the box scores and game summaries offered by other sites. Growth and a need to change to survive saw the masthead grow from less than thirty writers and a handful of stories appearing each day to a huge website with multiple editors and over a hundred writers.

The blink and you'll miss it nature of sports coverage, well almost any kind of online outlet, made me nostalgic for magazines and newspapers. By 2012, I was ready for a change. I put out a call for writers and overhauled the site. Zen Dixie was reborn as a general interest webzine. My plan was to create a place to put my art and writing.  I had plenty of room, so it made sense to share the wealth. If someone wanted to try their hand at writing about a given subject, the column inches were theirs.

The three years that followed our launch as a magazine in October of 2012, made me laugh, made me cry, made me want to scream and throw things, and made me proud of the five women and one man who became the editorial backbone of this website. It was an experience that I am grateful for, mostly because I was working with them.

I didn't start out wanting to be an editor. It was one of those things I fell into doing, and it was never a good fit. By the start of 2015, the wear and tear on me was both felt and immediately obvious. I was grayer, a tad more rumpled, and just plain tired. It was time for a change.

We published our last full issue February of 2015 and after some soul-searching in March, I decided to figure out what I wanted to do with the website, the domain, and the registered trademark.  Let's face it, those things are like a blank check to use my marginally marketable skills to create something. So I've been slowly but surely putting together a home base for my writing and a place to sell my art and crafts.

And that's how I came from a small Yahoo page to the site you see now. I hope you'll check back to see what I've written and buy what I make. Thanks to everyone (and I do mean EVERYONE)  who has taken this long, strange trip with me.  I wish all of you happy trails and good fortune.  It's time for me to take a sidestep from the tightrope with faith that the net really is there.