This Is Going To Make Me Cry, Isn't It? 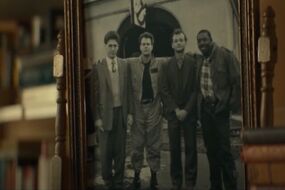 I don't know of anyone who is a fan of the Ghostbusters franchise who didn't hold their breath and hit the pause button on the first trailer when McKenna Grace pulled back the now iconic khaki jumpsuit to reveal the name on the left breast patch. It's not like we didn't already know just looking at the grandkids. Of course they are Egon Spengler's.

What I didn't expect was the news that a CGI version of Egon would make an appearance. The stories differ about what Egon does in the movies. Frankly, I think I've spoiled enough even writing about it.

Should I be grateful or not for being warned about this gut punch? A little under a year ago, I was one of thousands of people who saw the final episode of Season Two of The Mandalorian. Luke Skywalker walked onto the bridge of the ship where everyone was trying to wait out a siege by residual Empire troops to retrieve Grogu (AKA Baby Yoda.) I am not about to pretend I was too cool for it all and just shrugged and murmured, "Luke's here. Nice!"

No.  I was a mess. I wept through the rest of the episode and then got in touch with every geek my age I knew to ask if they saw what I saw and then some of us cried again.

Now here's the thing about that.  It really wasn't a Star Wars thing or a Mark Hamill* thing that caused such an emotional reaction. 2020 was an awful year. What some of us saw when Luke Skywalker raised his hood was a vestige of the life we knew we'd never get back. To see that unexpected ghost of our collective past was a reminder of how far we were from 1977 to now not just in the calendrical sense, but our ability to believe in heroes, to assume that good always wins.

We know better and we really, really don't want to because of how it makes the world look and feel.

So now we're doing this dance again in 2021. Still fearful, and still trying to fit the pieces back together, we see another ghost. Like last year's reappearance of young Luke, this is a bit of CGI fabulism. I wonder what it will be like for Harold Ramis' friends and family to see him onscreen and hope it offers them the comfort of a beau geste. For those of us who loved the movies since the mid-80s', is it going to be like seeing Luke Skywalker as he looked in 1977? It will also serve as a sort of goodbye to the First Gen of this story tradition. We need to understand that life moves on and there is room for a new generation of 'Busters who will belong more to the kids who go see Afterlife than they will to we GenXers. It should be a sign of hope that there are people willing to take up things that mean as much to them as they meant to us.

Maybe those outsized reactions can be cleansing if we let them. This is ultimately a mix of joy at seeing something we loved again and mourning as we finally let it go.

*No shade intended on Mr. Hamill. He's fun to follow on Twitter.
The Ghostbuster image is property of Sony Pictures.